The Taube Department of Jewish Studies at the University of Wrocław opened its new home in a historic building on the Isle of Sand overlooking the banks of the Oder River in Wrocław on June 18, 2018.

The inauguration commenced in the Prof. Jerzy Woronczak auditorium with the cutting of an honorary ribbon to mark the official opening. Prof. Marcin Wodziński greeted the guests, including a number of our staunchest sponsors. Professor Adam Jezierski, president of the University, welcomed our guests. Professor Marcin Cieński, Dean of the Faculty of Philology, presented future plans for reconstruction of the refectory that once abutted the building. Monika Jaremków, head of the Departmental library, treated everyone to a lively history of the building itself.

Afterwards, Prof. Wodziński led a tour of the renovated building, while Wrocław artist Mira Żelechower-Aleksiun gave a curated talk on her series of paintings commemorating Bruno Schulz. Anna Szpakowska-Kujawska and Lev Stern, artists closely connected with Wrocław, as well as a number of younger artists from the Fine Arts Academy, also donated paintings for permanent display at the Department.

Various multi-media presentations were exhibited on the history of the building, and the student club. Guests were invited to peruse faculty publications. Rabbi David Basok mounted a mezuzah at the entrance. Prof. Wodziński unveiled hand-painted plaques on the sponsors wall, with room for many more. The evening ended with an awards ceremony for outstanding students, a vegan reception, a live jazz trio concert, and a surprise visit by American virtuoso violinist Elizabeth Pitcairn, who enthralled everyone present with a performance of Henryk Wieniawski’s polonaise on her legendary Mendelssohn Red Stradivarius.

Thanks to a major grant from Taube Philanthropies and Koret Foundation and a new site from the University of Wrocław, the Taube Department of Jewish Studies moved into new premises at św. Jadwiga 3/4 on Sand Isle in the historic old center of Wrocław on the banks of the Oder River. Originally established in the middle ages as an Augustinian monastery, it was rebuilt in the early decades of the 18th century. After the Prussian government secularized the religious orders, numerous collections from former monasteries were deposited in the building and it became part of the University library in 1811. Edith Stein occupied a favorite desk in the reading room while writing her philosophy dissertation. During World War II, Nazi General Hermann Niehoff was headquartered on the site during the last-ditch Festung Breslau campaign.

The Polish University of Wrocław gradually restored the building after the war, and rededicated it in 1958 as the manuscripts division of the University Library. The University’s manuscript collection was relocated to new quarters in 2017, and a major renovation of the premises was undertaken to make way for the Jewish Studies Department on the first floor.

The Department has grown from strength to strength from a small group of students gathered around the polyglot Prof. Jerzy Woronczak in the 1970s, to a full-blown degree program with a faculty of 10 full-time scholars teaching and researching topics across the entire spectrum of Jewish studies. 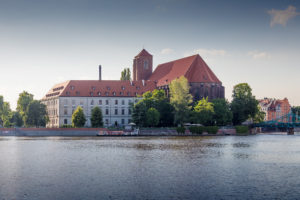 The new premises seen from the banks of the Oder River (photo by C. Gwóźdź)

University Library (second half of the 19th century) 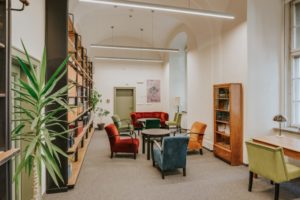 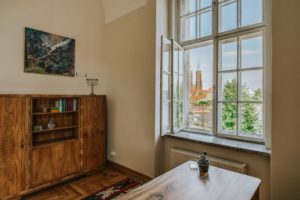 A view from the Jewish Studies Department (photo by M. Marcula) 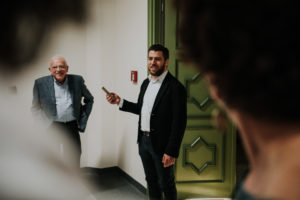 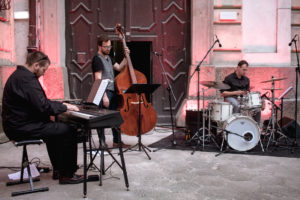