The purpose of this project is to introduce a canon of Jewish memoir literature as a significant but as yet almost entirely unknown historical source and render it accessible to Polish academia, in general, as well as to integrate this body of works into the current thinking on issues in Polish history and culture, specifically. The project will produce a 28-volume critical edition based on 25 of the most important memoirs culled from a larger collection of Polish Jewish memoirs and autobiographical sources. The volumes will include translations from Hebrew, Yiddish, Russian, and German. The series will include memoirs dating from the early seventeenth century to the mid-twentieth century, representing diverse geographic regions and various socio-cultural strata, and will take into consideration gender-based perspectives.

Compared with other Jewish studies programs in Poland, our Department stands out thanks to the importance it assigns to research on the history of women, feminism and gender studies. In 2007, the Department organized the first ever conference in Poland on the subject of women’s contribution to Yiddish culture, and again in 2011 on the mikveh as a space for female ritual. Research is being conducted on Jewish religious feminism, the Yiddish women’s press, and on the writings of Deborah Vogel, Rachela Auerbach, and Puah Rakovsky. A project devoted to Yiddish poetry written by women and an anthology of translated Yiddish poetry penned by women from the sixteenth to the twenty-first centuries is currently under preparation. 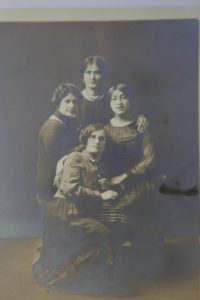 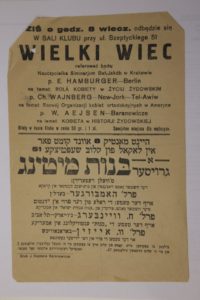 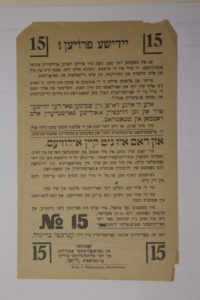 By confronting the oldest, most essential questions of Hasidism with hitherto unexamined sources, perspectives, and methodologies, this project attempts to provide a radically new look at many of the central issues in the historiography of Hasidism, one of the most important religious movements of modern Eastern Europe. Multidisciplinary in approach, the project addresses the cardinal features of all social or religious movement, viz.: definition, gender, demographic size, geography, economy, leadership, and decline. The end result of the project will be three books: a scholarly monograph, a historical atlas of Hasidism, and a textbook on sources for the history of Hasidism.

The Poetry of a Dying Language. Contemporary Judeo-Spanish Poetry as a Literary and Cultural Phenomenon

The purpose of the project is to describe and reach a hermeneutic understanding of the phenomenon of contemporary Sephardic poetry written in Judeo-Spanish (also known as Judezmo or Ladino) from the latter half of the 20th century. This vernacular Sephardic language is currently regarded as severely endangered. There were almost no literary works published in this language after World War II; poetry is the only genre to have appeared occasionally. However, a significant rise in the number of publications can be observed since the mid-1970s. This period is sometimes considered as the starting point of a renaissance in Judeo-Spanish poetry and in a broader growth of interest in Sephardic culture and ethnicity. My aim is to develop a review of this poetic production, present its most important authors, reconstruct their motivations for writing in Ladino, elaborate on recurring themes and motifs, and finally, to analyze the poetic language of selected authors. „Litvaks – Truths, Myths, Literature” is a project that will attempt to answer the „Litvak question” in the Kingdom of Poland. The result of the project will be a confrontation between the actual effects of the Litvak presence in the Kingdom and that which was written about this group in the popular literature of the period. I am primarily interested in issues such as: the population counts of successive Litvak emigration waves, the influence that Litvaks had on the economy of the Kingdom, and their interactions with the Kingdom’s population at large.

The London Society for Promoting Christianity amongst the Jews The London Society for Promoting Christianity amongst the Jews (LSPCJ) was the oldest and the largest British Protestant organization that carried out missions to the Jews. It was established in 1809 in London but soon moved beyond the borders of the city and the country, reaching Jewish communities on three continents: Europe, Asia, and Africa. Agnieszka Jagodzińska conducts research on history of the Society, focusing specially on the missions to the Jews in Poland in the 19th– and early 20th century. She is interested in the following issues: religious, social and political context of the missions in Poland, missionary strategies and Jewish reactions to the missions, ethnographic and historical value of missionary reports, missionary and anti-missionary literature, Christian-Jewish polemics, converts and missionaries. A part of these problems have been discussed in her monograph: „Duszozbawcy”? Misje i literatura Londyńskiego Towarzystwa Krzewienia Chrześcijaństwa wśród Żydów w latach 1809-1939 [“Savers of Souls?” Missions and Literature of the London Society for Promoting Christianity amongst the Jews, 1809-1939], Austeria: Cracow-Budapest 2017.

This is a document- and research-oriented digital humanities project which seeks to present a source-based, source-directed and source-powered history of the many Jewish communities of Breslau/Wrocław spanning over 800 years from the appearance of the first Jewish gravestone in 1203 to the transformation of Breslau into Wrocław and into the twenty-first century. For an academic audience, the project will construct a richly structured database of selected primary sources. By means of visualizations in the form of multimedia maps, the database will concurrently serve as a powerful research tool allowing scholars to examine specific historic issues emanating from the cross-hatching of relations between people, places and events within the database. For non-academic recipients, our project will construct a web interface between the meta-database and a dedicated website that will provide a source-based synthesis. The website will be in Polish, German, and English.

The Last Polish Shtetl: The Jews of Dzierżoniów in a Local and Transnational Perspective, 1945-1950

The goal of this project is to write a micro-history of a single Lower Silesian Jewish community in the first years after the Holocaust that will simultaneously throw new light on the entire history of the Jews of Poland after 1945. Research in not only Polish sources, but also those in Israeli and American archives will, using the residents of Dzierżoniów as an example, examine issues such as: the evolution of relations between the Polish Jewish community and Jewish centers in the world at large, in particular those centers that existed beyond the so-called “iron curtain;” the persistence of certain political positions and views; the continuities and discontinuities of pre-war patterns of social and cultural life; economic and demographic changes in the structure of Jewish life in Poland after the war; and finally, Polish-Jewish relations in the so-called “Reclaimed Territories.”